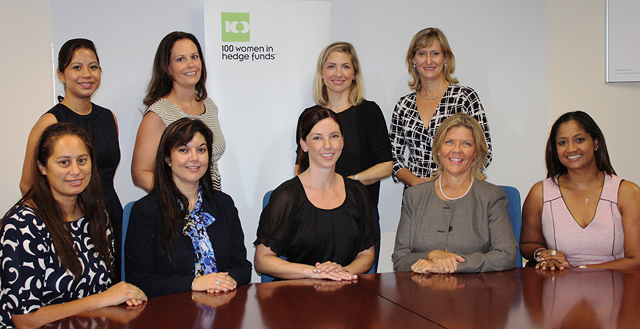 It is just over a year since 100 Women in Hedge Funds came to the Cayman Islands. Co-chairs Odette Samson and Jo Cunningham consider the importance of the foundation, its achievements so far and goals for the future.

Twenty years ago the only women on (or even in close proximity to) the trading floors scattered across the world’s major cities might conceivably have been the receptionists. Male dominance wasn’t confined to the trading floors, it was also true of the sectors that supported those traders: legal, accounting and administration.

How times and attitudes have changed. A 2013 report by the UK Commission on Banking Standards noted, in reference to the UK government’s initiatives to increase the number of women directors on boards of FTSE 100 companies, that: “If it is beneficial in the boardroom so it should be on the trading floor.” The report ultimately concluded: “More women on the trading floor would be beneficial for banks.”

Other studies in the field have similarly concluded that high levels of testosterone might be responsible for the high frequency of trading and levels of risk-taking which lead to bubbles and crashes in the markets.

Whether more female traders in the banks might have helped avoid the financial crisis of 2008 will remain a matter of lively debate, but what is clear is that the number of women in the funds and banking industry and, in particular, the number of women at the top is on the increase—not only in the hubs of London, New York and Chicago, but also in the Cayman Islands.

In the Cayman Islands, there are more women in partner roles in the legal and accounting firms and in senior positions within the banks and administration firms than ever before. While women may not yet make up the majority, they are notable in their numbers.

In some of the leading law firms on-island, 20 to 30 percent of the partners are women. A similar pattern is true in the accounting and advisory firms.

The rise and success of women in the private sector is matched by those in the Cayman Islands public sector. Just consider Her Excellency the Governor, Helen Kilpatrick CB; Cindy Jefferson-Bulgin, the registrar of companies; Cindy Scotland, managing director of the Cayman Islands Monetary Authority (CIMA); and Yolanda Banks-McCoy, head of CIMA’s Investments and Securities Division—all women who have excelled in their careers.

A warm welcome for 100WHF

It is no surprise, therefore, that with as little as four months of profile-raising the Cayman Islands gained sufficient support and interest to officially launch a location of 100 Women in Hedge Funds (100WHF). In February 2013, it became the 16th official location of this global network of professional women.

The Cayman Islands has since been recognised as one of the fastest growing locations in the history of the organisation. Such success stems from the collaboration and dedication of professionals in the Cayman Islands who are eager to make a difference. Members and supporters come together to support efforts in education, professional leverage and philanthropy.

As the only offshore jurisdiction on the organisation’s roster of locations, the Cayman Islands-based members are well positioned to remind the global financial services community of its place as a leading international centre for hedge funds.

A unique feature of 100WHF is that its members are invited and encouraged to attend all educational and networking sessions across its 17 international cities. To date, local membership has represented Cayman by attending education, networking and philanthropic events in Chicago, London, New York and San Francisco, among others, and participated in education panels and peer advisory groups in a number of cities in the US.

These events have provided extensive opportunities to connect with C-suite executives from major hedge fund and private equity firms, in addition to banking, brokerage and other key service providers in the finance industry.

100WHF’s broad reach has also made it possible to attract high quality speakers to Cayman, such as Jane Buchan, CEO of Pacific Alternative Asset Management Company, a $8.6 billion fund of funds investment firm, and Noreen Harrington, recognised as the whistleblower of the 2003 mutual fund scandal that led to the end of late trading and market timing abuses.

Another of 100WHF’s goals for 2014 is to support fundraising initiatives that benefit women and families. Following a rigorous application and due diligence process led by the 100WHF board of directors in New York, the Cayman Islands Crisis Centre (CICC) was selected as Cayman’s Philanthropic Beneficiary for 2014.

"It is pleasing that the needs of the local community in Cayman have been recognised by the 100WHF Board in New York."

It is pleasing that the needs of the local community in Cayman have been recognised by the 100WHF Board in New York and we are delighted that the CICC will receive the benefits of our fundraising efforts this year, adds Jo Cunningham.

The CICC’s role is fundamental to the community not only by providing immediate support and shelter to families affected by domestic violence, but also by helping to break the cycle of violence through the counselling and education of those children most affected.

Applications will be accepted in October this year from local charities that meet 100WHF’s 2015 global philanthropic theme of Education, followed by Mentoring in 2016.

The local committee welcomes the industry’s involvement and has been approached by a number of companies and individuals
that are committed to host, sponsor and participate in upcoming 100WHF events. It is clear that with the level of enthusiasm members have shown to date, 100WHF Cayman is indeed set to make a difference.

100WHF is a global network that includes more than 12,000 professional members in the funds and finance industry. Through its programmes, 100WHF has helped its global membership advance their careers and play an important role in this evolving industry, all while raising more than $33 million for charities.

Odette Samson is a partner at Deloitte and co-chair of the 100WHF, Cayman Islands.
She can be contacted at: osamson@deloitte.com

Jo Cunningham is a partner at Maples and Calder and co-chair of the 100WHF, Cayman Islands. She can be contacted at: jo.cunningham@maplesandcalder.com