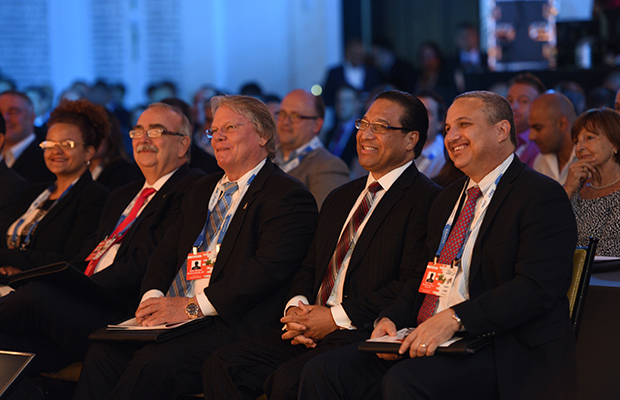 While Arnold Schwarzenegger provided the draw to the Cayman Alternative Investment Summit, the 500 attendees offered substance and some fascinating insights into the health of the funds industry globally, its drivers and future direction. Cayman Funds was there.

The Cayman Alternative Investment Summit (CAIS) has become something of a must-attend in the annual events calendar for funds professionals—and not only for those based on the Cayman Islands.

Investors and managers from far afield are now lured to the Islands on an annual basis, partly on the back of keynote speakers as high profile as you will find anywhere in the world. Al Pacino, Jay Leno, Meghan Markle and, most recently, Arnold Schwarzenegger have all drawn the crowds at this event, with many, for various reasons, becoming a big talking point for years to come.

One of the other highlights of this year’s event, held in February, reflected in the title, “Defying Gravity: The Future of Alternative Investments in Exceptional Times”, were the speakers Mark and Scott Kelly, twins and astronauts who have helped NASA study the impact of long-duration space flight.

"There is a strong belief among investors and fund managers that, while still evolving, the industry will continue to grow." Tony Cowell

CAIS also represents an excellent opportunity to take the pulse of the funds industry and establish the sentiment and mindset of investors.

This year, the organisers, KPMG and Dart Enterprises, surveyed attendees to establish this and the results make interesting reading, with socio and political changes globally the biggest area of concern for attendees.

The survey of more than 200 decision-makers at the event revealed that 44 percent believe the Trump administration represents the biggest potential global risk in 2017. Other top risks include cybersecurity (25 percent), China (14 percent), European elections (13 percent) and Brexit (4 percent).

Chris Duggan, director of CAIS and vice president of community development for event sponsor, Dart Enterprises, acknowledged that the world is facing some unique challenges at the moment.

“This coming year will be unlike anything the alternative investment industry has ever faced,” says Duggan.

“With rapid technological changes and major geopolitical shifts around every corner, the industry must show that it can chart a path through what promise to be choppy waters.”

Despite these challenges, however, there was also a sense of optimism at the event. A majority of survey respondents (85 percent) believe the alternative investment industry will grow in assets over the next five years, with 46 percent predicting there will be fewer funds than there are today and 39 percent predicting there will be more funds. Comparatively, only 8 percent believe the industry will shrink in terms of both assets and funds, with 7 percent foreseeing fewer assets but more funds in the future.

“Although challenges abound, there is a strong belief among investors and fund managers that, while still evolving, the industry will only continue to grow.”

It also showed that philanthropy remains a pertinent issue to the industry. A third of survey respondents said they regularly donate to a variety of causes or charities, with an additional 27 percent donating to a specific cause or charity. Twenty-two percent take it a step further by also sitting on the board of a charity and partnering with other philanthropic organisations or investors.

AI on the way

The theme of artificial intelligence (AI) emerged as something respondents believe is poised to disrupt 2017. Nearly a third of attendees (31 percent) think AI is the emerging technology that will have the most impact on the world in 2017. Other popular choices included robotics/automation (19 percent), blockchain (18 percent), cybersecurity (16 percent), self-driving cars (10 percent) and wearable tech (5 percent).

"We will continue to do everything we can to promote the industry and to make this conference the best it can be as the industry changes and evolves." Chris Duggan

Duggan, speaking to Cayman Funds magazine after the event, says the event illustrates that Cayman remains a leading domicile in the funds industry and that he sensed a renewed sense of optimism among those attending.

“Given the timing of the event, it was natural that the recent election of Trump dominated many discussions, but below that there was a sense of confidence and positivity in the industry, despite the many challenges it has faced,” he says.

“It is an industry that is evolving and Cayman can play an important role in that and the way it develops. We are certainly very positive about the future and we will continue to do everything we can to promote the industry and to make this conference the best it can be as the industry changes and evolves.”

The significance of Dart’s backing of the conference is not lost on many in the Cayman Islands. The group is the largest private investor in the Cayman Islands responsible for many of its most notable developments, including Camana Bay and the new Kimpton Seafire Resort + Spa, the venue for CAIS this year.

Duggan reaffirmed the group’s commitment to Cayman, the industry and the future of the conference itself.

“Dart remains firmly committed to growth of the CAIS and by extension the industry as a whole—we are already well into the planning stage for CAIS 2018, on February 8 and 9,” he says.

“We are delighted with the way it has grown and we remain resolute to make the 2018 event bigger and better again.”

He also reiterated the company’s commitment to strengthen many aspects of Cayman’s economy.

“Business and tourism are intertwined in the way they complement each other,” he says.

“Each one drives the other. If one thrives, so does the other. We are very bullish on both sides of the economy—financial services and tourism—and we will continue to invest in Cayman on this basis.”

Open your eyes and prepare for inflation

One of the most talked-about speakers at the CAIS was Pippa Malmgren, an American policy analyst who told investors to open their eyes, warned of a return to inflation and described Donald Trump as the ‘Uber of politics’.

Economists and the investment community must learn to open their eyes, and use their common sense and imagination more, Pippa Malmgren, an American policy analyst, told delegates at the Cayman Alternative Investment Summit (CAIS).

Malmgren, who is a former member of the US president’s Working Group on Financial Markets, and the founder of the DRPM Group and co-founder of H Robotics, is well known for predicting the 2007 economic crash (selling her home months before it in anticipation) and, in 2016, both the UK’s vote to leave the EU and Donald Trump’s election as US president.

She revealed that she is simply willing to look at the world with a perspective of common sense and see things others are blind to.

“I called Trump’s election and Brexit and in 2007 I sold up my assets because I predicted a crash was coming. The fact is, the financial markets continuously miss the most important events of our time.
“We love math and polls and algorithms and models and we think that if they don’t show something then it cannot be real. But that approach makes you miss things. You need to open the other eye,” Malmgren said.

She predicted Trump’s win by simply looking at how he would fill venues when he spoke, whereas she saw empty seats at Hillary Clinton’s rallies.

She also warned delegates that 2017 will be characterised by a return of inflation, bringing with it a serious challenge for the financial markets and economies globally.

“Inflation will return in 2017. It has been building in the system for some time and I am astonished anyone sees this as a surprise,” Malmgren said.

While inflation would mean economic pain and further political turbulence, good things could also flow from such a place, including innovation and growth, but she warned that the issue would become a divisive one, especially in Europe.

She offered an insight on the impact of Trump’s influence on US politics. The way he is challenging and disrupting the power structures in Washington can be compared to the impact a new or disruptive technology may have in other sectors.

“I see him as the Uber of politics in the way he is disrupting the norms in politics,” she said. “Trump is saying to hundreds of bureaucrats that he doesn’t need them any more. But would narrowing or flattening the structure of government and making things smaller, really be such a bad thing?” Malmgren asked.